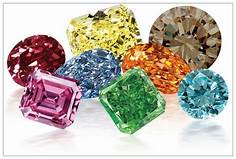 What Are Fancy Color Diamonds?

Fancy color diamonds are true miracles of nature, found in all colors of the rainbow and every combination of colors in between.

My first exposure to colored diamonds was when I was a small child. My grandmother would visit us from New York City. She always looked so glamorous, and I could not help but be attracted to the beautiful shiny jewelry she wore. One piece in particular, was a ring featuring a very large (at least to my four or five-year-old eyes) square yellow stone that shone like the sun and sparkled each time she moved her hand. I was completely mesmerized by the stone and curious to know all about that beautiful ring. Much later I learned it was a diamond, a so-called canary diamond. Canary was the common description used for fancy yellow diamonds back then, and one that is still used commonly today.

In a previous article I posted, How to Buy An Engagement Ring, I mentioned briefly the rarity of diamonds and how that rarity affects value and price. There are few gemstones or colorless diamonds, that rival the rarity of fancy color diamonds. I am going to break it all down for you and hopefully inspire you to fall in love with these exquisite treasures, as I did long ago.

Diamond is the hardest substance on earth and can be polished and faceted to bend and reflect light like no other gem material. The results are an explosion of spectral colors, white light, and sparkle that leaves the viewer in awe. When you combine these characteristics with color, the results are spectacular. Whether soft pastel hues or rarely pure, strong saturated colors, you know that you are looking at something that is rare to behold!

Fancy color diamonds are one of Mother Nature’s greatest achievements. They are not exactly mainstream as only about one in 10,000 diamond crystals will qualify as a fancy color; these diamonds are among the most sought-after in the world.

Although royalty and rulers of Asian and European empires sought out and coveted colored diamonds for their gemstone collections and adornment, prior to the 1970s there was little commercial interest in these stones. A diamond dealer once told me that when he found these anomalies in the parcels of small diamonds delivered to him, he would pluck them out and throw them in his desk drawer and forget about them. Years later he sold what was less than a handful of tiny colored diamonds for $64,000!

Today auction houses, dealers, and prestige jewelers are in fierce competition to acquire the best and rarest stones for their top-tier clients.

Most people are familiar with the 4Cs of diamond grading: Color, Cut, Clarity, and Carat Weight. These are the factors used to assess diamond rarity for colorless and near-colorless diamonds. When it comes to fancy color diamonds the only two of the 4Cs that really matter are color and carat weight, but the color is paramount. Rather than the D-Z scale used to grade nuances in color in “white” diamonds, color descriptions (see below) are assigned by highly trained diamond graders or sophisticated machines that measure and analyze color.

The classification of color as defined by the Gemological Institute of America (GIA):

But before we look at the individual colors and the specifics of each, let’s address the remaining Cs and some general guidelines that apply to fancy color diamonds.

Cut: Master cutters fashion fancy color diamonds into fancy shapes (any shape other than round) to maximize color-most often square or rectangular modified brilliants. They are often cut deeper which helps to strengthen and bring out the color. It can take months or even years for a cutter to analyze a rough crystal before deciding exactly how it will be cut to maximize its beauty and liveliness.

Carat Weight: Dealers price most fancy color diamonds individually as each one is unique. Diamonds with strong saturated colors that are extremely rare will command jaw-dropping prices. Even small diamonds, less than, 0.50 carats, in rare colors can be tens of thousands of dollars per stone. Large stones will go for whatever someone is willing to pay. It’s all about supply and demand.

Next, we will look at several colors found in the marketplace: Images are enlarged to emphasize colors.

Countries of Origin: South Africa, India, the Central African Republic, South Africa is responsible for 90% of blue diamonds in the world.

Country of Origin: Australia, Borneo, and most mines

Countries of origin: Most mines produce brownish diamonds; however, Australia is an important source.

Countries of Origin: Central Africa along river banks, Brazil and industrial-grade diamonds that at times may be suitable for commercial use

When considering the purchase of a fancy color diamond, it is critical that the diamond is accompanied by a grading report from an established gemological laboratory. The report must provide evidence that the diamond and color are natural in origin (not man-made or color enhanced in a laboratory.) It will also assign a color grade on the GIA fancy color grading scale, as well as details on the cut, carat weight, and clarity. These details will give you confidence in your purchase and is a document essential for resale and insurance purposes.

For more information on fancy color grading reports from the GIA-GTL, click here

If your question was: What are fancy colored diamonds? I hope you now have a basic idea of what they are all about. Fancy Color Diamonds are rare, valuable and like works of art, one of a kind. And most of all, role models of beauty!

Thank you for reading my article and I look forward to your questions and comments below!

What Are the Best Diamonds? The 4Cs of Diamonds